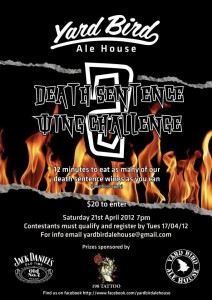 Saturday 21 April saw 8 competitors battle it out to be crowned the Yardbird Ale House Death Sentence Wing Champion of round 2. The second event of the year showcased a number of seasoned eaters, including the winner of the Hot Dog Style Hot Dog Eating Competition, a previous entrant from round 1, and another competitor who had eaten the Off the Wall Diner’s “World’s Hottest burger twice!

Drawing a crowd even larger than the first event, it was standing room only as competitors attempted to down as many of the Death Sentence Wings as they could in 12 minutes. The previous record of 39 wings set by Jared Martin seemed to be under threat early, when wings were being eaten at almost one every 10 seconds. However once the heat started to settle in, the pace slowed, but remained strong throughout the 12 minutes.

At the half way mark, it was difficult to see who was leading the competition, with a number of eaters bowls almost full of discarded bones and lashings of hot sauce. Tristan “The Wing Wizard” Want, Rhys “The Squeeze” Endres, and Colin “The Conqueror” MacLaurin all wing-to-wing in a race to the finish. Only in the final minutes did there seem to be two clear leaders, with three others fighting it out for minor placing’s.

Andrew “The King of Heat” Ruller, while starting strong and handling the heat easily, dropped the pace at around the half-way point, unable to keep up with the volume of wings needing to be consumed.

Two last minute entrants Darryl “The Food Fiend” Fraser and Jerry “The Hurter” Houkamau, both large set gentlemen looked to be the part, but were unable to match the determination and speed of the other eaters.

With less than two minutes to go, Nate “Dizzle” lurched forward, cheeks full of wings looking very close to seeing the wings again, but pushed through the pain barrier and kept eating, holding what looked to be the leading position with Ben “Pullin” Pullen coming a very close second.

In the last 30 seconds, the unthinkable happens. In a moment of panic, Nate “Dizzle” crams too many wings in his mouth to further the lead over Ben, has a reversal, and is instantly disqualified him from the competition. The crowd couldn’t believe it, Nate couldn’t believe it, and a somewhat relieved Ben sitting opposite continued his pace until the final seconds counted down to zero.

Taking third place and winning a $25 bar tab with a count of 32 wings in 12 minutes, Tristan “The Wing Wizard” Want.

And taking out first place, matching the current record of 39 wings in 12 minutes and taking out a first prize of $100 bar tab was Ben “Pullin” Pullen

Round 3 of the Yardbird Ale House Death Sentence Wing Challenge is to be scheduled for July, so stay tuned, find us on facebook, follow us on twitter, or subscribe to our newsletter at the bottom of the page.

For the full collection of photos, check out our Facebook album of the event

PLEASE NOTE: Images below are HIGH RESOLUTION and may take a little while to download, so please be patient!

MEDIA OUTLETS: For more full resolution images or any other information please contact us

Contestants must qualify and register by Tuesday 17 April 2012. Entry fee is $20 and must be paid prior to the event. For more details, email events@competitiveeating.com.au, visit the Yardbird Ale House facebook page at http://www.facebook.com/YardbirdAleHouse or leave a comment below this article.

Do you have what it takes to become one of the very best competitive eaters in Australia?